I was born in Detroit, Michigan and attended school in the Detroit and Pontiac public school districts. I attended Osborn High School in Detroit and transferred to Pontiac Northern High School in my sophomore year. I wore many hats in high school.  Be caused my mother, worked to support me, I felt the need to work and help support our home. I worked a part-time job while playing sports. I played basketball, ran track, cross country, and wrestled. I did this and still maintained above a 3.5-grade point average throughout high school.  I didn’t succeed alone, I had the support of family, teachers, and coaches.  Especially the late Eloise Williams and James Nelson, who played a significant role in my success.  I have always been committed to giving back by helping others and to community service.  At Pontiac Northern, 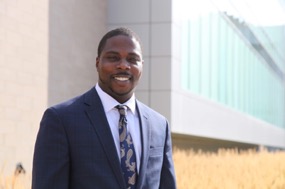 I tutored and mentored students. Helped with book drives, food drives, and other events to make Pontiac a better place to live. In 2007, I was awarded the Pontiac Optimist Award for Outstanding Community Service.

After graduating from Pontiac Northern H.S., I  was accepted into James Madison College at Michigan State University, which only admits a select few students each year.  I double majored in Social Relations and Policy and Political Theory Constitutional Democracy.  I am the first in my immediate family to attend college. College was made affordable because of the scholarships I received. One scholarship I am most proud of is the Melvin J. France Sr. Scholarship.  This scholarship was received from the Southfield Kappa Foundation which recognized my work in the community and for my academic achievements.  I received this scholarship for my four years as an undergraduate from the Southfield Kappa Foundation.

In 2011, I graduated from James Madison College at Michigan State.  In 2012, I was accepted into Thomas M. Cooley Law School and graduated in 2015. Currently, I am an Assistant Prosecuting Attorney at the Oakland County Prosecutor’s Office. I am married and have four children.